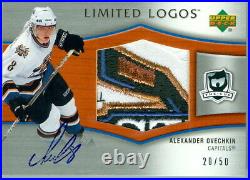 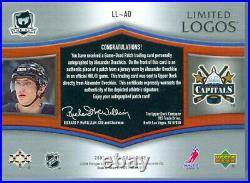 2005-06 THE CUP #LL-AO ALEXANDER OVECHKIN LIMITED LOGOS 20/50 AUTO 4 COLOUR LETTER, TOP 5 OF ALL, GAME USED PATCHES. Ovechkin cards are so hot, they have gone up more than 500% in the past 1.5 years, so get him now, while he's still affordable, before he breaks Gretzky's records in the next 4-5 years! As far as accomplishments go, between players, there is no comparison, read below..

Just wait until next year!! As only the 8th player ever.. Ovechkin's record might stand forever.. The championship MVP completed Ovechkin's career.. As he also chases down one goal scoring legend.

Despite playing in the toughest scoring era.. One of the most dominant forces of all time.. 3x MVP / 1x Playoff MVP. Only 3 others in history.. Bobby Orr, Wayne Gretzky & Mario Lemieux..

Only Gordie Howe & Bobby Hull with more. Came up huge during their winning run.. With a playoff leading 15 goals.. Down 0-2 in Rd1, he scored 6 points over the next 4 games..

Set up game 6 OT winner against the Pens in Rd2... Scored game 7 winner in the ECF..

And registered a point in every Finals game.. Most decorated goal scorer ever. Ovechkin is the only player in NHL history.. 11 seasons with 45+ goals.. 2 records unlikely to ever be broken..

In a time when it was harder than ever to score.. Scorers he is compared to.. Played during the free flowing early days..

Been the only goal scoring machine.. Breaking records set decades ago.. Doing it the most exciting way.. Skill, speed, size & strength..

They will go down in history side by side.. As their rivalry defined the NHL for over a decade.. With their collections of Hart & Conn Smythe trophies.. 3/1 Ovechkin & 2/2 Crosby..

Among the few to have won both.. They come in 4th & 5th greatest historically.. They have the same amount of career points.. Crosby has 4 NHL 1st team selections.. The 3rd most all time..

As the greatest goal scorer. Ovechkin is the best at what's most important in hockey.. He grew further in stature... 3rd all time in First Teams..

Lebron James & Tom Brady.. He has secured his place.. Among the pantheon names in hockey history.. And all of modern sports.. THIS CARD HAS A GAME USED PATCH, NOT PHOTO SHOOT, LIKE MOST OTHER YEARS OF THE CUP.

The investment potential is huge here. Just imagine the value of Ovechkin's cards in 5 years, after he breaks Gretzky's all time goal record of 894. Ovechkin's Cup APR /99 has already gone up by 450% in the past 2 years alone. And is really starting to take off. The true, four colour game used patches are extremely rare, as there are only about 8 of them in total.

I don't mean the barely 4th colour in the corners, that you have to squint to see, like a couple of them out there. Invest now, before Ovechkin's prices skyrocket, just like Lebron James. Thanks for viewing, and best of luck to you..

The item "2005-06 CUP ALEXANDER OVECHKIN LIMITED LOGOS 20/50 AUTO 4 COLOR GAME USED PATCH" is in sale since Sunday, August 30, 2020. This item is in the category "Sports Mem, Cards & Fan Shop\Sports Trading Cards\Ice Hockey Cards". The seller is "ovechkinthegreat8" and is located in Chicago, Illinois. This item can be shipped worldwide.