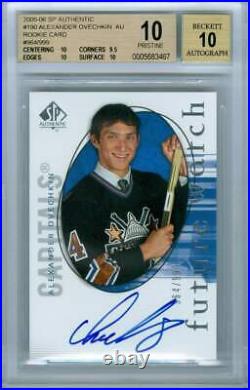 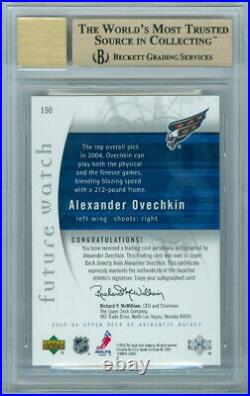 2005-06 SP AUTHENTIC #190 ALEXANDER OVECHKIN RC ROOKIE AUTO FUTURE WATCH BGS 10, Auto grade 10, Serial # 964/999. Super tough to get a high grade, due to the thickness of the card stock. All cases are brand new, and scratch free. Invest in Ovechkin now, before the prices of this TRUE Rookie Card REALLY skyrocket, just like the Cup has, by a 450% increase!

As he also chases down one goal scoring legend. Despite playing in the toughest scoring era.. One of the most dominant forces of all time.. 3x MVP / 1x Playoff MVP.

Only 3 others in history.. Bobby Orr, Wayne Gretzky & Mario Lemieux.. Only Gordie Howe & Bobby Hull with more. Came up huge during their winning run..

And registered a point in every Finals game.. Most decorated goal scorer ever. Ovechkin is the only player in NHL history.. 11 seasons with 45+ goals..

Scoring 32 in half a season.. In a time when it was harder than ever to score.. Scorers he is compared to..

Played during the free flowing early days.. Been the only goal scoring machine.. Breaking records set decades ago.. Doing it the most exciting way.. Skill, speed, size & strength..

They will go down in history side by side.. As their rivalry defined the NHL for over a decade.. With their collections of Hart & Conn Smythe trophies.. 3/1 Ovechkin & 2/2 Crosby.. Among the few to have won both..

They come in 4th & 5th greatest historically.. They have the same amount of career points.. Crosby has 4 NHL 1st team selections.. The 3rd most all time.. As the greatest goal scorer.

Ovechkin is the best at what's most important in hockey.. He grew further in stature... 3rd all time in First Teams..

Lebron James & Tom Brady.. He has secured his place..

Among the pantheon names in hockey history.. And all of modern sports.. In most cases, the items we sell have been submitted for grading/authentication to third-party grading companies.

As we are not professional graders/authenticators ourselves, we trust the grading process and procedures administered by these third-party companies. Because a number of third-party grading companies exist, each company's grading criteria is unique to themself. As a result, it is beyond reasonable expectation to assume that each company's criteria translates unilaterally and equally across brands and grades. It should therefore be understood that buyers are purchasing items in the given grade, by the specific third-party grading company, indicated in the listing title and description only.

Simply put, we do not guarantee that any PSA, BGS, SGC, KSA, GAI, etc. Graded cards will equally grade between companies. We have provided large, high resolution scans in most cases. Because of the high resolution of the scan available, anything visible in the scan is to be considered part of the description and condition.

The seller is "ovechkinthegreat8" and is located in Chicago, Illinois. This item can be shipped worldwide.