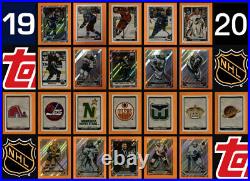 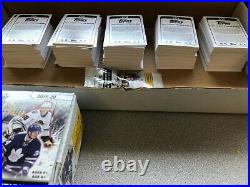 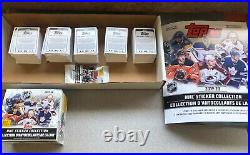 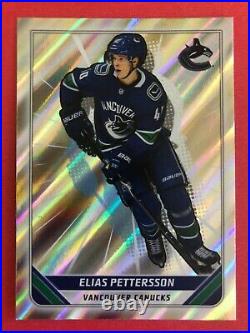 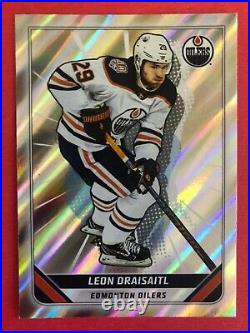 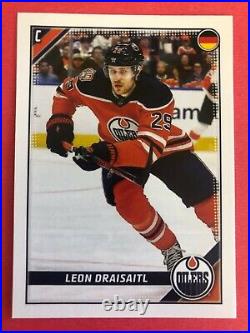 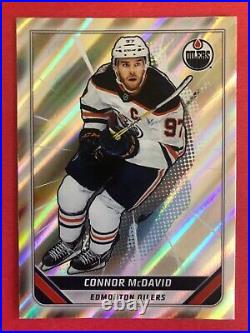 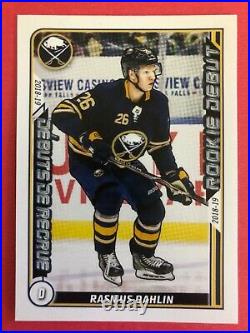 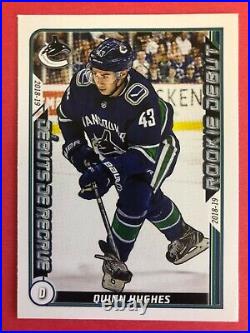 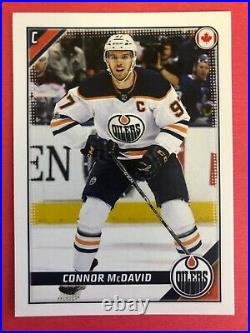 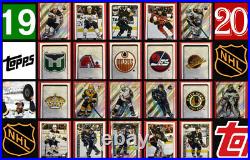 All stickers in order from #1-630! The scan is of the STARS of the set. You get 626 loose stickers and 4 that are JUST found in the album and NOT in packs! Since Panini no longer does Hockey stickers, Topps really stepped up their game for the 2019-20 NHL season, 630 stickers in this set including NOW the BIGGEST NHL HOCKEY STICKERS set of all time! There were just 5 stickers per pack this year, making this an even more expensive set to put together.

This set comes with the album as the album also has 4 of the stickers from the set. Checklist for the COMPLETE SET of 2019-20 Panini NHL Hockey Stickers Series.

There were also 487 regular paper glossy style stickers. Also of note is the fact that 4 stickers were ONLY available exclusively as an album insert.

Stickers #40 Brad Marchand, #74 Sean Monahan, #244 Zach Parise and #261 Carey Price. These 4 stickers were NOT available in packs. Perhaps as a way to encourage collectors as they opened packs, some of the more "popular" players seemed to be inserted a little more.

It is extremely hard to assemble complete sets from this series. They recommended the secondary market or opening more packs as the only way to complete your set. It's more fun opening packs anyway. This 2019-20 year celebrates the re-birth of Topps into the hockey stickers market. The size of each full sticker is 7.3 cm X 5.3 cm (2.88 in X 2.1 in). Each package contained 5 stickers (which included 1 of the 143 foils per package). The minimum number of packages needed to make a full set (assuming absolutely no doubles) is an NHL stickers record of 126. Remember, as noted above, there are 4 Exclusive stickers ONLY found in the album. There is ONLY one version of the sticker album: the cover features Nikita Kucherov, Connor McDavid, Auston Matthews, Jordan Binnington, Patrick Kane and Nathan MacKinnon. The 2019 Stanley Cup winners were the St. Louis Blues and Ryan O'Reilly who won the Conn Smythe Trophy as the NHL Playoffs MVP. Season of operation of the NHL (101st of play). Jack Hughes was the 1.

Overall draft pick and played for the New Jersey in his first NHL season. On October 16, 2018, Oilers forward. Broke his first NHL record, by contributing to, either by scoring or assisting on all of the first nine goals scored by his team in the regular season. The record was previously held by Adam Oates. Who contributed to the first seven goals scored by the.

The Seattle NHL franchise (still unnamed) become the NHL's 32. Team and will start play in the 2021-22 season.

The Seattle NHL team will play in the Pacific Division and the Arizona Coyotes will move to the Central Division for the 2021-22 NHL season. This item is in the category "Collectibles\Non-Sport Trading Cards\Trading Card Sets". The seller is "nhlhockeystickers" and is located in this country: CA. This item can be shipped worldwide.